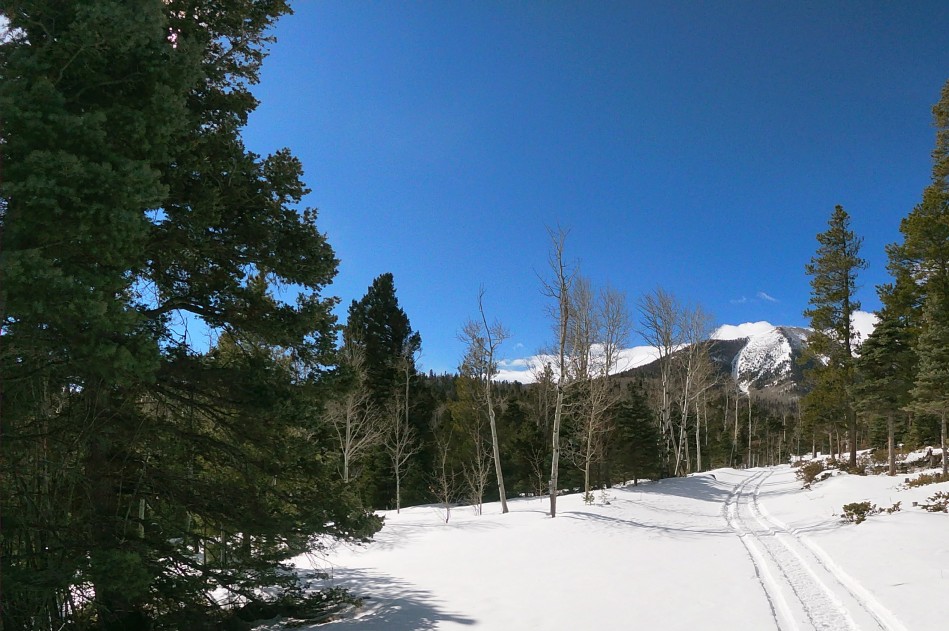 Sometimes you just need to get out of the city for a day. Our area has been hit with a decent sized snow storm at least once a week for the past month. I asked my lovely wife if she wanted to go for a winter hike? “Are you crazy” is the response I received. My buddy Dan who has been begging me to do some back country skiing stepped up. We were hopeful the snow would be good.

Our destination was the old abandoned Conquistador ski area just west of Westcliffe, CO. I read somewhere it was a 90% snow making resort, no wonder it is almost always barren.

As we pulled into town, our hopes were high the runs would be covered. Inching closer to the mountain we could tell the wind had moved through and the mountain was practically bare. Our usual route up the Hermit pass OHV trail is snow covered in the mornings and bare in the afternoon which results in a lot of walking.

We decided to try another route. We continued up county road 160 to the Gibson Creek Trailhead. The high for the day 46 degrees, starting temp was 25 with a 30mph wind. Donning our skis we leave the trail head.

Less then a 1/4 mile it connects to the Rainbow Trail. Weaving our way south through the forest and around ridges.

We almost missed this sign for an old mine on the Rainbow Trail.

A stream crossing was next, no tracks on the other side. We were the first to explore this area. The snow was getting deeper.

An hour and a half later we give up the search for the ski resort and head west up a valley, just exploring. We follow a snow mobile track to see where it leads.

The snowmobile turned around in this aspen glade. As we looked around, we ponder some spring skiing opportunities before heading back down.

Dan decides he’s going to try and get a few turns in on the way down, puts his split board back together. He later regrets this decision.

After some sweating, swearing and general disappointment we make it back to the truck. Overall, not a bad day. A gorgeous skin through the woods. We would have preferred some turns but it beats sitting on the couch. I was hoping to show some cool graphs and elevations gains but my watch had other ideas, next time.

0 comments on “Through the snowy woods…”